Millenials do not exist: so why market to them?

We often read in the wine press about the (supposed) difficulty of marketing wine to Millenials (eg. The maddening business of marketing to Millennials; Are Millennials a threat to fine wines?). However, the main reason Millenials are hard to market to is because they don't exist. The idea of "generations" is a marketing concept — there is no such thing as a discrete generation, because human reproduction is continuous, and thus all generations overlap — their distinction as groups is arbitrary.

Nevertheless, marketers often recognize cohorts of people who behave in a similar manner, because they can then market to the group rather than to the individuals. This does not change the fundamental idea that cohorts do not exist in reality, because generations overlap. We may thus be making life difficult for ourselves, by trying to do something that is biologically illogical. The groupings are nothing more than a convenience, and the individuals could alternatively be grouped based on any criteria you care to choose (the pie can be sliced in many ways).

Where does the concept of discrete cohorts come from?

By definition, my daughter is a different generation to myself, as are my parents. However, this does not necessarily make any of us part of a cohort (a group of people with a shared characteristic), just because we were born within an arbitrary set of years. So, strictly speaking, we need to distinguish generations from cohorts — the recognition of "generations" for marketing purposes should actually refer to "cohorts", and I will use this word below.

You can read about the conceptual origins of cohorts and generations at Wine Opinions. There are two organizations who seem to be responsible for defining cohorts – the editors of the book American Generations: Who They Are and How They Live (currently in its 9th edition), and the Pew Research Center.

The cohorts, believe it or not, are based on changes in birth rate in the USA (see the discussion at Defining generations: where Millennials end and Generation Z begins). For American Generations the cohorts look like this:
There was an increase in the U.S. birth rate immediately after WWII (ie. a boom), followed by a decrease for a decade, followed by another increase for a decade and a half, etc. The changes in rate are assigned to arbitrary years, which are then used to group the generations into cohorts.

So, the definitions come from the reproductive behavior of the parents. What this has to do with the consumer behavior of the children is unclear — attitudes are formed by your upbringing, sure, but not by the birth rates of your parents. As Wine Opinions puts it: "While generational comparisons and analysis are often useful in consumer research, these broad age segments are not always key drivers of behavior." There may well be better ways to group consumers than this, in terms of marketing to them.

I say this in spite of the fact that I am obviously a Baby Boomer, my parents were classic Silent Generation people, and my daughter is an archetypal Millenial. My daughter does, indeed, explicitly reject what her parents did — that's why her life is so different from mine. However, I do not recall, growing up in the 1970s, that I rejected my parents' goals — that was the 1960s not the 1970s. By the 1970s, young people had gotten over that, and instead concentrated on the idea that life was fun (disco music, flared pants, platform shoes, etc), rather than being for contemplating your own navel and the seriousness of the world — sadly, the latter idea returned in the 1980s and has not left us since.

The idea of breaking continuous variation (eg. generations) into groups (eg. cohorts) is not new. Indeed, we have always done it with people, for example, by recognizing different "races" — this idea was originally related to genetic variation (not assumed cultural superiority!). This genetic idea may once have worked, because most people stayed in the same place, and thus genetic differences arose in different geographical locations. However, in the modern world, with mass transportation, people are much more genetically mixed than they have ever been. "Races" was once a practical genetic concept, but not any more.

At best, we are now dealing with what are called "fuzzy groups" — there can be a core part of each group that is distinct from other groups, but at the boundaries the groups grade into each other.

The difference between groups and fuzzy groups can easily be seen by considering geography. For the USA, recognizing an east coast and a west coast makes perfect sense, because the distinction is not geographically arbitrary — these are not fuzzy groups. However, dividing either of these two coasts into a north coast versus a south coast would be completely arbitrary — there is no obvious (non-arbitrary) geographical point where the distinction might be placed. At best, we would be dealing with fuzzy groups.

I have written before about the inherent dangers of putting people into categories in the wine business, which is often done for Big Data (because it is otherwise hard to deal with): The dangers of over-interpreting Big Data. Marketers should be wary of generalizations, even when they are of practical use.

This is another problem. If we pre-define a set of groups and then compare those groups we will surely find differences between them. However, this is called "confirmation bias" — we use our data to confirm the existence of the groups that we pre-defined.

Consider the following graph, which shows Wine Purchasing Decision Cues by Generation. There seem to be differences among the cohorts for most of these bases for deciding which wine to buy; and they are all statistically significant (based on contingency chi-square tests). 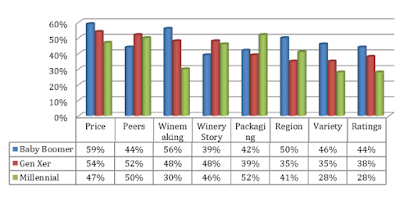 However, this is simply confirmation bias. We took 109 people, with continuous generations, divided them into three cohorts based on age, and now we are showing that these cohorts differ. However, we already know that people of different ages behave differently, and this is all we have shown from our data. We have not demonstrated that there are three cohorts, because we pre-defined them before we started. The cohort "Millenials" exists in the graph solely because we put it there, not because it is necessarily a group of people who have similar behavior.

Marketing is the term used for the process of telling consumers to buy something that they didn’t know they wanted. If they already know they want it, then you don’t have to market it to them — they will buy it, you don't have to sell it.

A classic example is the Yugo car, which was considered hard to market because it did the only thing that cars were originally designed for — transporting people from A to B. It did almost nothing else, but it fulfilled its design purpose cheaply — that is why it had the longevity it did (selling 800,000 cars in the USA from 1978 to 2008). However, it was persistently mocked because it didn’t do any of the other things that marketers had persuaded the car-buying public are essential — it is the available options and the perceived image that sell cars, not the transportation activity.

So, perhaps it is time to stop trying to find out how to market wine to Millenials. Marketing is about the packaging and the presentation (telling a story), not the contents. There is little point to learning that Millenials like unique packaging, or that they use wine to relax, etc. If they are interested in the contents of the packaging, then sell them the wine, don't try to market the packaging to a group that does not exist.

Looking for time trends in the wine industry is a useful activity, especially possible future trends, because it helps all of the people who rely on the wine industry for their livelihood. Using confirmation bias to categorize fuzzy groups, on the other hand, will get us nowhere. It seems that marketing to Millenials might be an example of the latter activity.

Joanne Teagle, Simone Mueller and Larry Lockshin (2010) How do millennials’ wine attitudes and behaviour differ from other generations? 5th International Conference of the Academy of Wine Business Research.