Grape diversity is not the only biodiversity that vineyards need

The wine industry has become increasingly aware that it must address climate change, as I have written about recently (Climate change and the most northerly vineyards in Europe). In particular, the concept of biodiversity means that reliance on a few grape-vine varieties is inappropriate for long-term profitability (Regional diversity of grape varieties is important for climate change).

Equally important, however, are agricultural practices, and their affect on the world. It is therefore worth asking: how does this affect the wine industry? After all, traditional viticulture involved completely clearing the native plants and animals, and turning the land into a regularly plowed monoculture.

This image does not look good in the modern world, where biodiversity counts. How do we explicitly address what are now increasingly accepted as unacceptable previous practices? I will discuss that here, including looking at a new idea that is currently being explored.

When I was being trained as a professional biologist, in the late 1970s, biodiversity was the Big New Thing. The Western world had changed during the 1960s, and people had started to become conscious of their environment. Not just their own personal environment, which was often a city, but the natural environment, on which their local environment critically depends.

The turning point for many people was Rachel Carson’s book Silent Spring, first published way back in 1962, which strongly made the point that contemporary agricultural and forestry practices were changing the natural environment in unintended ways. These ways were starting to have direct and indirect affects on people’s personal lives.

For biologists, a key component was, and still is, that the biological world has innumerable interactions among its components, only some of which we can easily see. When A affects B, which then affects both C and D, and D then affects A, we cannot always see, and thus predict, this feedback loop. We see it only afterwards — we have 20:20 hindsight, not foresight. The concept of complex and far-reaching interactions was poetically, but aptly, expressed as: When a butterfly sneezes, the polar bears tremble.

So, agricultural and forestry practices are under public pressure to change. We now have the expression “sustainable agriculture”, although it is unclear just how we should identify it or assess it in practice. It has to do with recognizing the complexity of biological interactions — sowing, growing and harvesting practices must all be carried out in ways that recognize their long-term affects on the local soil, water and air. Next year’s harvest depends just as much on last year’s practices as it does on next year’s.

Sustainability is a long-term goal, and (let’s get this clear) a laudable one; and yet we have only been discussing it for a short while. How can we know, in such a short time, which practices are actually sustainable? Olden practices were sustainable, in the sense that we successfully carried them out for hundreds of years. However, since the Industrial Revolution in the late 1800s, we have made innumerable rapid changes, none of which we have yet assessed long-term —except with the hind-sight of seeing their unintended, and sometimes unfortunate, consequences.

We also have the expression “organic agriculture”, which is not very explicit, but seems to have something to do with not using artificial agricultural treatments. (See How to make sense of sustainable wine certifications, for an explanation of the confusing array of possible wine terms.) This approach to agriculture also seems like a good idea, although it is often questioned just how “natural” some of the recommended treatments actually are, or just how much better they are than the so-called artificial ones.

An alternative, however, and the one favored by professional biologists, is not to spray in the first place, but to “fight fire with fire” (although not all grape-growers may like that particular analogy, just at the moment!). That is, we use one part of the biodiversity to control another part. To do this, we must study the existing biological interactions, and work out whether there is something that we can use to achieve our goals, without stuffing up everything else at the same time. This is not easy, by any means, but it is likely to be both organic and sustainable, because it helps preserve the biodiversity, both of the crops and their surrounding environment.

So, while diversity of grape-vine varieties is important in the modern world, it is not the only biodiversity that vineyards need — they need to preserve as much of the natural biodiversity as they can. They can do this by becoming a part of their local environment, rather than trying to be separate from it. A neatly plowed vineyard may look nice and orderly, but its biodiversity is very low, and unnecessarily so.

Therefore, these days we are just as likely to see a vineyard full of other plants between the rows, rather than bare earth, perhaps kept in check during the off-season by grazing sheep. You don’t want the animals eating the new grape-vine shoots, but if you pick animals that are generally grazers not browsers, then the vines should be safe. Cows are bit big for vineyards, and goats are generally browsers, but sheep are quite suitable for allowing biodiversity to exist in the vineyard while not interfering with grape production. These days, tractors and herbicides are out, and cover crops (biodiversity) are in.

That leaves us with the matter of animal pests. Two recent articles from the southern hemisphere discuss potential modern approaches, especially if you are not hide-bound by European traditions. [Note: this post was written several weeks ago, so the news reports are not quite as current as they originally were.]

One article, Villa Maria trials native plants as herbicides alternative, lays it on the line in New Zealand. Native plants have mechanisms for dealing with native pests, and the presence of some of them in the vineyard may very well assist the grape-vines, as well. That is, the ground cover shouldn’t be some introduced grasses and herbs, but should be some collection from the local flora. Which ones, we do not yet know, so it is about time we found out.

The other one, EcoVineyards: the future for pest-resilient vineyards, does the same thing for Australia:


The main principle is for growers to introduce native plant species into their vineyards, to support populations of beneficial insect predators that will contribute to the biological control of vineyard pests. The inclusion of insect predator species in vineyards can potentially lead to reduced input costs, a reduction in the use of chemicals, and an overall improvement in the environmental sustainability of wine regions.

There are, of course, similar moves in the northern hemisphere. As but one example, recently there was a Hands-on vineyard workshop on Lodi beneficial insect plants, for the growers of San Joaquin Valley “to learn more about why, what and how to plant rows of native California plants known to boost the population of beneficial insects in a given area as much as 28 times over.” 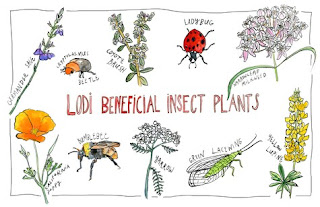 So, pesticide sprays are out, and biological control is. Under these circumstances, the words organic and sustainable start to have some real meaning for the modern world.

Finally, it seems that there will soon be a way for the wine industry to properly see the relationship between each vineyard and its surrounding environment. The Somm Foundation has now announced the Global Diagram of Wine. This lets you see the vineyards interactively, within their topographical and biological context. We are told that millenials want to interact with their lifestyle products, and this is perfect for that — it is, however, not (yet) free. Professionally, it would also need a soil map and some climate data, to be perfect; but these will come. 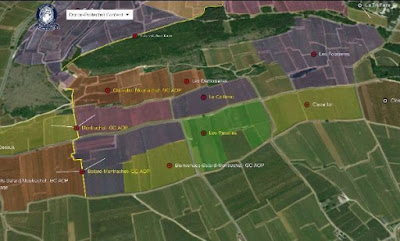 There has never really been any sharp distinction between Old and New World wines, but instead a continuum of styles between two extremes. However, agricultural practices have often differed significantly. In response to the modern world, those practices need to converge on something acceptable to modern consumers.

Moreover, for the wine industry to compete in the modern alcohol market, every step of the production process needs to be demonstrably committed to modern practices. We cannot just point at the grapes, as I discussed above, but the rest of the process, as well, including bottle and label production. One comprehensive example is provided by recent changes in the range of Regal Rogue vermouths.
Posted by David Morrison at 12:30:00 AM No comments: