Estimates of cork taint from the Wine Spectator Napa office

The Wine Spectator magazine's Napa office tracked the number of apparently cork-tainted bottles in their tastings of California wines from 2005 to 2016, reporting their results at the beginning of the next year. There has been no report on the situation in 2017; and James Laube, who wrote the reports, has recently retired from regularly doing the California tastings (Wine Spectator announces changes in California wine reviewers). So, this could be an appropriate time to review their data.

Each year, all of the bottles tasted in the Napa office were assessed for "off" aromas. For bottles with corks, taint is usually caused by the presence of the chemical trichloroanisole (TCA) in the cork, but there are other potential sources of off smells. For example, the Cork Quality Council also lists 1-octen-3-ol, 1-octen-3-one, and guiacol.

Whatever the source, the data in the following graph refers to the "off" wines as a percentage only of those bottles with corks. Obviously, the data show that the percentage of tainted wines has improved through time.

Indeed, the trend looks impressively like cork quality is steadily improving. However, as I mentioned in a previous post (Drawing lines through a graph of points — what does this mean?), fitting a trend line to a graph can be a deceptive business. For example, the dashed pink lines in this next version of the graph highlight a different pattern — that tainted wines decreased between 2009 and 2010, but have otherwise remained relatively steady before and after then. Maybe something happened at that time?

Either way, the cork industry is usually reported to have a much lower estimate of cork failure than is shown in the graph above, typically 1-2 percent. This estimate was clearly not believable 10 years ago, and it is still half of that reported by the Wine Spectator, even now.

The cork manufacturers (mainly in Portugal) have been reported to be getting their act together, to improve the situation (eg. Taint misbehavin’: improving TCA testing methods to ensure cork quality). Improved testing may explain the apparent improvement between 2009 and 2010. The basic issue seems to be getting the cork wood clean, so that it can be turned into wine stoppers. Indeed, the industry is claiming that they will have eradicated TCA by the year 2020. 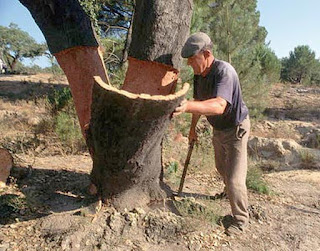 This raises the point as to why we use corks for wine bottles in the first place. Vidon Vineyard has this to say on the matter:


The main reason corks remain the predominant closure is tradition; change doesn’t come about easily in many fields. As long as one is willing to accept an occasional bad bottle of wine, corks are fine.

In any case, it seems clear that consumers often associate corks with high-quality wines (The effects of wine bottle closure type on perceived wine quality).


A problem is that much of the time a cork-tainted wine isn’t recognized as such, but is passed off as “just not a good wine”, which means it’s the winemaker’s fault. And oftentimes a slightly tainted wine is consumed as “not too bad”, while if it could be tasted alongside an untainted wine with the same label, the reaction may have been “wow, this is great”!

Given that most wines are drunk within a few months of being released, the idea that we need corks in these particular wines seems to be ludicrous. Apart from anything else, untwisting a screw cap is so much easier!

On the other hand, we might also be concerned about the fate of the Cork Oaks (Quercus suber) themselves. These trees are owned and managed by farmers, who need to make a living from their land. If they can no longer make money from their cork trees, then those trees will be under threat of being replaced by some other crop. According to the Cork Quality Council, 37% of the cork forests are in Portugal (and 27% in Spain), where 50% of the cork production is centered (with 31% in Spain) — so, this is where the effect will be felt. In 2015, wine corks represented 72% of the Portugese cork industry's value, worth €644 million. This is not an inconsiderable industry, which will exert pressure to keep the Oaks.
Posted by David Morrison at 12:30:00 AM