What is an old vine?

We are sometimes told that wines made from “old vines” are special, in some way. However, it has also been noted that "the global wine market does not structurally value old vines, or treat old vine wine as a premium category of rich and enduring worth" (The Old Vine Conference). Old vines have their own worth as the heritage of the wine industry, irrespective of the wines themselves, and independently of their low production levels.

However, oldness is a relative thing. In the USA “old vine” seems to mean anything more than 30 years old. In Australia, they don't call them “old” unless they come from the 1800s (the oldest recorded ones seem to have been planted before 1850). If I look out my back window, I can see a dozen oak trees that seem to be a couple of hundred years old, so even 1850 may be a bit young, for a plant.

This is not an exercise in one-up-manship, but is intended simply to emphasize that oldness is relative, not absolute. A medieval church is obviously older than almost all plants. We therefore need to compare plants with plants; and also we should really use the word “older” instead of “old”.

There is, as far as I know, no official definition of “old vines”, or “vieilles vignes” if you prefer French. As far as individual plants are concerned, you can read about the oldest known grapevines in Wikipedia; but we are talking here about whole vineyards, producing commercial wines.

Let’s start with what are believed to be the oldest vineyards, so that we have a baseline. They are all in Australia, which has the advantage of isolation in order to preserve much of its heritage.

The Freedom Shiraz vineyard, at Langmeil in the Barossa Valley (South Australia), was apparently planted in 1843, by Christian Auricht. His original plantings survive today (c. 1 acre), although the vineyard now combines younger vines with the originals. Similarly, the Turkey Flat Shiraz vineyard, also in the Barossa Valley, was planted in 1847, by Johann Frederick August Fiedler. These seem to be the oldest vines whose age has been authenticated; but today they are also a combination of younger vines with the originals.

The oldest vineyard that is claimed to consist entirely of original vines is another Shiraz one, but this time from the Goulburn Valley (Victoria). The Tahbilk Shiraz vineyard was established in 1860, with Ludovic Marie as vigneron. It has had a checkered history, but the original cellars and vineyard from 1860 are still in use.* Incidentally, Tahbilk also claims to have the largest single holding of Marsanne grapevines in the world (100 acres), originally also planted in 1860, although the current vines date from 1927.

There are apparently a couple of other vineyards in the world, some of whose vines date back to this same period. Jancis Robinson's Old Vine Register was originally compiled by Tamlyn Currin in 2010, and it has been updated occasionally since then (last updated 27 Nov 2019). It lists two such vineyards: 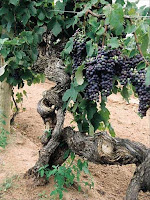 However, most of the other vineyards that have been formally recorded date from the 1880s onward.

For example, California's Historic Vineyard Society has a Registry of Heritage Vineyards, based on three criteria:
This register lists 10 vineyards dating from the 1880s, and 21 from the 1890s. The oldest 10 are:

There is also a South Africa Old Vine Project, which has a list of the 30 Oldest Old Vine Blocks in South Africa. The oldest three date from 1900 (in Wellington, Swartland, and Breedekloof).

Given the number of older vines in the Barossa Valley, it should come as no surprise that there has been one attempt to formalize a few definitions of oldness, in the form of the Barossa Old Vine Charter (2009):
These refer to individual vines, not whole vineyards; but at least ten vineyards in the Barossa and (adjacent) Eden Valleys are listed as having patches of Ancestor Vines (see Australia’s Old Vines). These include 31 acres Shiraz, 19 acres Grenache, 11 acres Cabernet sauvignon, 9 acres Sémillon, and 7 acres Mourvèdre. Some of the other very early vineyards include:
Vineyards meeting the definition of Ancestor Vine do also occur elsewhere in Australia. For example, we have:
Incidentally, Tyrrell’s Wines also has what they believe to be the oldest Chardonnay vines in the world, in their HVD Vineyard, dating from 1908. The oldest Cabernet sauvignon vines are believed to be in Penfold's Kalimna Vineyard Block 42 (Barossa Valley), dating from 1888. It should not surprise you that most French vines post-date World War I, and many post-date World War II, as well. Australia's isolation has served it's wine industry well, in this case.


* The winery is definitely worth a visit. I still remember a visit at the beginning of a cold winter day, in which I literally had to cup the tasting glass in my hand for a minute, to warm it enough to smell its contents.