Re-use is not often a part of the three Rs

In the modern world, most people should be familiar with the Three-R environmental creed: Reduce, Reuse, Recycle. This management idea has a lot to do with sustainability, which is the 21st century approach to living in our world.

The Three-Rs are specified in their order of priority. That is, we should pro-actively reduce the usage of non-essentials, such as packaging. For the rest, we should preferably re-use or re-purpose used materials. For any remainder, we should retro-actively recycle it. Nothing should be going into rubbish land-fills, which was the fate of most unused products in my youth. 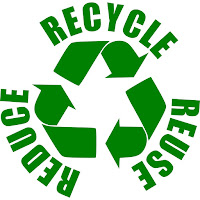 This approach to waste management is such an important creed that many governments have made it compulsory. For example, there are 35 Chapters (known as the "acquis") that need negotiating in order for a country to join the European Union, with Environment being Chapter 27. Anyone who compares an applicant country to the EU (eg. Bosnia and Herzegovina) with a member country (eg. neighboring Croatia) cannot but notice the difference in roadside rubbish. This will change soon for Bosnia and Herzegovina, I presume.

The wine industry does care about this creed, of course, and we are constantly being told about new initiatives. However, it seems to me that most of these reports are aimed at Reduce and Recycle, rather than Re-use.

In terms of Reduce, most of the initiatives are incorporated into what it now called "organic agriculture" (in our case, both viticulture and wine production). This includes reducing use of things like water, non-renewable energy, pesticides, herbicides, genetically modified organisms, bottle weight, and also reducing the production of carbon emissions.

In term of Recycle, in the vineyard this involves recycling things like the vine prunings, and also the marc (or pomace) from the winery — recycled as fertilizer, or converted to biofuels (Innovative solid biofuel production from grape marc through hydrothermal carbonization), or even flavor enhancers (This Penticton company is crushing wine-making’s sustainability goals). In the wine production part, it is the packaging we are usually referring to (not usually the wine itself), notably bottles, but also considering the use of cans, and bag-in-box packaging. Even corks are being recycled (Nike unveils sustainable sneaker line featuring recycled cork from wine industry).

For Re-use, it is also the packaging that is often important (not the wine!). This issue also arises in other industries such as gardening, where the use of plastic pots is normal. What happens to those millions of pots are the purchaser plants the plant?

Where I currently live, the answer to that question is that in small quantities they can go into the "plastic packaging" part of the recycling system, which is melted and used to form new plastic. However, more commonly the pots go into the "burnable" part of the system. The environmentally friendly fate of this is explained at the foot of the post. However, back when I lived in Australia there was a garden center near my house that would accept used pots from customers. The owner would clean them, and then re-use them for their original purpose. Re-use precedes Recycle. 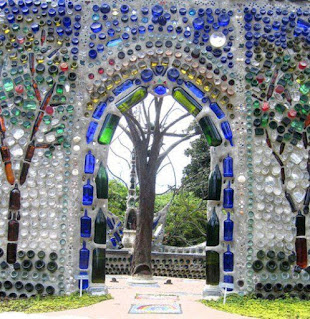 So, what is the wine industry doing about this sort of issue, in terms of its packaging? We hear lots about new forms of packaging (cans, etc), and new labeling, but this may have little to do with the Three-Rs.

Packaging consists of two elements: the wine container, and the transport container. Obviously, in both cases this packaging could be re-used rather than re-cycled.

Glass bottles are actually not too good, in terms of either Reduce or Recycle — glass bottles may well constitute 50% of the wine industry's “carbon footprint” (Carbon footprints, wine and the consumer). The energy used to create a bottle (from sand) can easily be 20 times that for a can (the sand has to be heated to at least 2700 °F / 1500 °C); and recycling is not much better (the glass has to be heated to 1500 °F / 800 °C). So, re-using the bottles (rather than recycling them) provides plenty of scope for improvement, in terms of carbon footprint (Cans or bottles: what’s worse for the environment?) — only for Re-use does a bottle beat a can (who re-uses cans?).

In southern Europe, and sometimes among migrants from there to the New World lands, wine flagons have often been re-used. The customer brings the empty flagon to their local winery, and exchanges it for a full one (and pays for the contents). The used flagon is then cleaned by the winery, and re-filled. This procedure does not involve Recycle, nor does it engender much in the way of transportation costs (ie. it matches Reduce). I actually saw this in practice only once in Australia, long ago, at Paul Conti Wines (formerly Contiville).

More recently, an initiative has been announced in Australia regarding re-use of the transport container (Wine merchant’s sustainability initiative helping local wineries save money):

Michael Zitzlaff has launched a sustainability initiative that is saving wineries thousands. When Zitzlaff saw how many wine box dividers were going into paper recycling every month, he thought there must be a better way to reuse them ... Many local boutique winemakers deliver their wines directly to stores, so Michael started putting the box dividers aside for the next time a local winemaker would visit the store ... Together, the [ten] stores have collected 12,800 carton dividers, which are now on their way to be reused by local wineries to bottle the 2020 vintage – which is a saving of over $10,000 for the wineries.

I am not suggesting that this particular idea can be easily implemented everywhere, but it does show the sort of thing that can be done, if people start to think about the concept of Re-use, as well as Reduce and Recycle.

It seems to me that the wine industry still has a long way to go in terms of recognizing that Re-use actually precedes Recycle in the Three-Rs. Hopefully, this will change in the near future.


Burnable recycling in Sweden is used to heat buildings. In towns, every house has its own insulated hot-water pipe connection, as well as a cold-water pipe. Every house is heavily insulated (roof, walls, foundations) and all windows are double-glazed — snow in Sweden does not melt off roofs! Each house is centrally heated by water-filled heaters, either as an element under each window (eg. my previous house) or under the floor (my current house). In town, this hot water comes from a power-generation plant, which uses a high-intensity incinerator to heat the water. There is no such thing as "rubbish" in Sweden — everything gets used one way or another.