Is Scandinavia currently the most attractive wine export market?

There has been increased interest recently in wine export markets. This has resulted from the down-turn of some economies, plus increasing trade disputes among some countries, and an oversupply of grapes in some regions. Exporting wine can thus be necessary in some cases, as well as unreliable in others.

In 2018, the ProWein Business Report announced that its surveys (of 2,300 industry experts) indicated China as the most attractive market, in terms of future potential as an export destination. Sadly, China has faded somewhat since then, amid a downturn in its overall economy, and trade disputes with the USA. In recent weeks, this position has been exacerbated by the Coronavirus outbreak, which has had effects on the wine industry worldwide.

At number 4 attractiveness in the 2018 report was Scandinavia (Denmark, Norway, Sweden), having moved up from number 5 the previous year. Well, in the 2019 ProWein Business Report, Scandinavia moved up to number 1:


Polled on the current attractiveness of markets, exporters and wine producers rate Scandinavia, with Norway and Sweden in the lead, as the world’s most attractive export market.

There is no explanation given for this choice by the experts consulted, and so we may well ask: is this expert ranking justified?

To answer this, we could look at the current alcohol market in Sweden, where I live, as the biggest of these three countries (10 million people) — as opposed to Denmark (6 million) and Norway (5 million); plus Finland (5 million) if you include all of the Nordic countries. However, you should recognize that the Scandinavian market is only the size of that of Florida, or New York state, or that of Texas if you include Finland.

We can start by noting that Sweden has increasingly become a wine-consuming market. I have noted before in this blog that all four national governments took control of alcohol sales some decades ago, to deal with the historical Nordic binge drinking (Why are there wine monopolies in Scandinavia?). The idea was to get the people off spirits and into lower alcohol alternatives, such as beer and wine.

The first graph (from Kym Anderson and Vicente Pinilla: Annual Database of Global Wine Markets, 1835 to 2016) shows that the Swedish government has eminently succeeded — Sweden is now firmly a wine-consuming market. Note that the total consumption of alcohol stabilized at c. 7 liters per adult back in 1970, and so the graph shows changing drink preferences.

These data translate into an average of 29 liters of wine per capita (15+ years old) since 2010, when consumption reached its current stable level (data from the International Organisation of Vine and Wine). This is 1 bottle per person every 9 days. For comparison , here is a recent graph from the American Association of Wine Economists, in which Sweden ranks 12th: 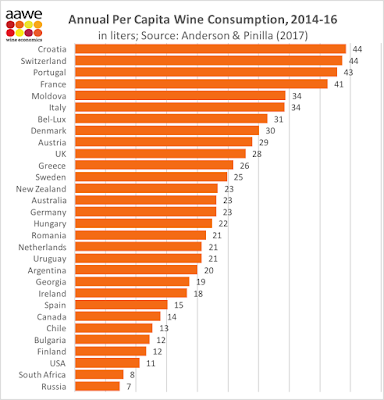 The main source of alcohol for consumers is retail liquor stores, all of which are the run by the government-owned by Systembolaget. The next graph shows the percentage of the total consumption for each of the known sources of alcohol (from Björn Trolldal, 2019: Alkoholkonsumptionen i Sverige 2018. Centralförbundet för alkohol- och narkotika-upplysning Rapport 184).

Traveler direct imports reached a peak back in 2004 (at 26%). Most travel for Swedes is within the European Union, where there is now free trade; so this is no longer necessary. Smuggled drinks reached a peak in 2005-6 (at 11%) — I have no idea where it is being smuggled from. Low alcohol beer is available for sale in supermarkets, and this is the only alcoholic product allowed to be sold there. This has slowly decreased through time — Sweden is well-known as a market for craft beers, and these are in the retail stores only. Restaurant sales have been constant through time — this is not a big market because Scandinavia has very restrictive drink-drive laws. Home-made products include beer and fruit wine — my wife makes wine from gooseberries and cherries, and sometimes cider from apples.

So, Systembolaget has increased its dominance to counter-balance the two main drops in source. I have noted before that this is generally not a problem for the locals (see Wine monopolies, and the availability of wine). Indeed, Sweden is one of the cheapest countries to buy wine (see Why is wine often cheaper in Sweden than elsewhere?). This does not mean there aren’t old-timers who can remember the Bad Old Days, last century; and I have a few current beefs of my own (My annoyances with my alcohol monopoly).

This next graph shows the percentage of Systembolaget’s wine sales by volume, for the top 14 importing countries in 2019 (see Systembolaget försäljningsstatistik). Italy dominates, with 28% of sales, followed by France with 14% and Spain with 12% — these three make up 54% of the sales. This is quite typical — according to European Commission data, 80% of EU wine production stays within the EU.

If you want to import wine into Sweden you need go through an importer, who will either supply the trade directly (restaurants, bars, caterers), or market the wines retail through Systembolaget. There is, of course, a lot of politics involved in trying to get wine into a foreign country (usually importers, distributors, and retailers). In this case, however, there is no separate set of distributors. Those of you familiar with the American three-tier alcohol-distribution arrangement can breathe a sigh of relief.

Much of the market is in the (notoriously difficult) “not cheap, not premium” retail space. The economics of the small indigenous wine-making industries mean that local wine is more expensive than the imported stuff, which is good for the importers. However, the market does not have $US3 wine, because it is not economic to import it; and in the modern world of premiumization this may not matter. The cheapest bottled wine is $US 5.50; and wines like Barefoot cost $US8, not $US7 (as in the USA). So, it is a mid to premium wine market. Wine can, however, be cheaper in Sweden than in its homeland (Can we trust between-country or between-state comparisons of wine costs?), although whether this will continue in the anticipated Coronavirus recession remains to be seen. 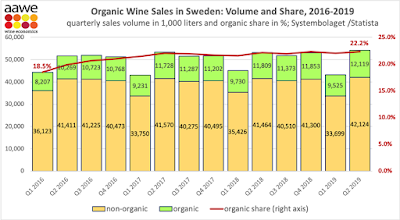 Swedes are notoriously concerned about the environment, and care about where their (many) imported products originate. Indeed, according to European Commission data, origin is slightly more important than cost when Europeans buy food products. The above graph, from the American Association of Wine Economists, shows the rising share of Organic Wine sales in Sweden (see also the market bulletin from Wine Australia). It will be difficult to compete in the marketplace if you turn up with dodgy goods (there is nowhere to dump it).

In a similar vein, a recent Wine Intelligence report noted that:


According to The Global SOLA wine opportunity index 2019, the biggest opportunities for lower alcohol wines are in New Zealand and Singapore, while for no alcohol wine it was Sweden, Hong Kong, Finland and Singapore. In Sweden and Finland, lower and non-alcoholic wines are relatively more popular as they are much cheaper than conventional table wine.

They are also more popular because of the tight drink-drive laws, and because there are lots of Millenials, who don’t drink wine like their Baby Boomer parents do.

In the current time of Coronavirus and trade wars, maybe Scandinavia really is a very attractive wine export market.
Posted by David Morrison at 12:30:00 AM