Is there value-for-money in the Wine Spectator Top 100 List?

There are two extreme ways to purchase wine.

First, wine can be bought using price alone. This appears to be based on the idea that wine is simply flavored alcohol, and any alcohol will do. This may be true, but it does not seem to result in the purchase of wine that is worth tasting, as repeatedly demonstrated by Jeff Siegel in his $3 Wine Challenge.

Second, wine can be bought based on a quality score assigned by some critic. This appears to be founded on the idea that either: the critics know what they are talking about, or my friends and colleagues will be impressed by my knowledge and/or wealth. The latter is called “wine snobbery”, while in the modern social-media world wine critics may be redundant. 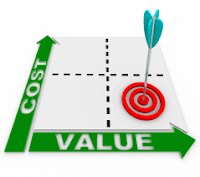 Somewhere in between these two extremes is the idea that wine could be purchased on the basis of value-for-money, which is intended to reflect some balance between the two extremes. That is, we buy the cheapest wine that meets some specified standard of quality.

A number of web sites specialize in providing suitable advice, some of which I have listed in a previous post (Finding inexpensive wines). For myself, I have suggested an explicit mathematical approach, which involves looking at the relationship between quality and price for a range of wines (Calculating value for money wines).

I do not expect people to actually do this math for themselves, although it is certainly effective. The idea is to fit an exponential model to a graph of the data. This model assumes that price increases exponentially with quality — that is, for each unit increase in quality the price is multiplied by some constant number, rather than adding a constant price. Sadly, this relationship applies widely throughout the world of economics, although it means that prices increase rapidly with quality.

In this regard, it is interesting to ask whether this idea applies when we focus solely on the high-quality end of the market. The idea might apply across a wide range of quality levels, but does it still apply when we focus on a narrow range?

One way to investigate this for wine is to look at the so-called “best wines” as announced by some set of critics, such as those that congregate in a wine magazine. The obvious one to pick is the Wine Spectator, which produces an annual Top 100 List — this is intended to include what they perceive to be the best 100 wines of those that they have reviewed in the previous 12 months “based on quality, value, availability and excitement”.

The graph below shows those 100 wines for the year 2019 (based on independent blind tastings of >15,000 wines). Each point represents one or more wines, based on its quality score (horizontally) and price (vertically). Also shown is the line for the best-fitting exponential model (as described in the top-left corner).

The idea is that, for wines near the line, you are paying for what you get (in terms of quality) and getting what you are paying for (in terms of money). Above the line, the wines are increasingly poor value-for-money (you can get the same quality for much less money), while below the line they are increasingly better value-for-money (some other wines cost a lot more for the same quality).

The first thing to notice is that the exponential model does fit quite well — 69% of the variation in price is related to quality. In the world of economics, this is pretty good. That is, the wineries really are charging you more money for what the Wine Spectator sees as increasing quality. We could, indeed, use this model to identify those wines that are the best value-for-money.

The next thing to notice is that the biggest range of value-for-money is at 95 and 96 points. There is everything from good value (at the bottom of the graph) to the biggest rip-offs (at the top). The Wine Spectator has certainly not used “value” when deciding to include those wines at the top of the graph (> $140) — it must therefore reflect “excitement”.

On the other hand, up to 93 points the wines are almost all good value. The exception is the Domaine du Castel Grand Vin Haute-Judée 2016, which costs all of $85 for only 91 points.

On the other hand, the best value seems to be the Tenuta Bibbiano Chianti Classico Riserva 2015, which costs a mere $30 for 96 points of quality.

So, there you have it: yes, good value-for-money can be found in this Top 100 list — go for the highest-scoring wine at $20, or the cheapest wine at your favorite score. There is also, of course, some very poor value-for-money, but in those cases you are getting vinous excitement, instead.

In a future post, I will look at the whole range of Wine Spectator Top 100 lists over the past 32 years.
Posted by David Morrison at 12:30:00 AM

Email ThisBlogThis!Share to TwitterShare to FacebookShare to Pinterest
Labels: Value for money