The role of Wine Influencers — more of the same

The experts are no longer just “in the stands”. These days, everyone’s a public expert, because social media (eg. Facebook, Instagram, Twitter, Youtube) allow us to trumpet our own opinions to the entire world. If you happen to have thousands of followers, then you are also an Influencer.

This means that when LeBron James drinks a wine it will sell a lot better. The idea seems to be: “You may not be able to play like LeBron, but you can drink like him.”

To some people, this seems like a new phenomenon — a product of modern social media (eg. The LeBron Factor: who drives wine trends today). However, it is simply an extension of things that have always happened. For example, there have always been fads in personal names based on who is in fashion at the moment — virtually no-one was called “Kylie” until Kylie Minogue came along (see the Baby Name Wizard). The so-called LeBron Factor is simply a quick-acting version of the same thing.

However, given that LeBron seems to prefer cult wines, I suspect that he actually knows squat about wine, but is instead what we call a “label drinker”. This is perfect for Instagram, of course, since that social medium is all about pictures, and the only part of a wine that ever appears in most pictures is the label.

Where does this leave the wine industry? It leaves us with one version of the field of Influencer Marketing — a form of social media marketing involving endorsements from Influencers (eg. Influencer marketing is trending right now because it can work). You don’t put an ad in a magazine, instead you put a bottle in the hand of an Influencer. This could be cheaper, except that the Influencer may charge you more than the magazine ever possibly could. This is called Pay to Play, of course.

On the other hand, the wine industry is still pretty much where it always was, because we have always had what are now called Micro- or Nano-Influencers:


Social media marketing involving endorsements from influencers, people and organizations who possess an expert level of knowledge as well as social influence in their respective field.

The key difference here (Micro influencers on Instagram) is that:


Micro-influencers aren’t big-name celebrities that you’ll find in the tabloids. Instead, they are [people] with anywhere from 1,000 to 100,000 followers. They’ve built their audience thanks to their niche knowledge and authenticity. Most importantly, their followers trust them and engage with them at a much higher rate than other [influencers]. Indeed, micro-influencers have been found to be among the most effective sellers on the market.

So, marketers may get better responses from sponsored posts when they’re published by Nano-influencers — they have a smaller reach, but their followers are highly dedicated.

Once again, there is nothing fundamentally new here. We have always had media personalities with wine expertise, and with many followers — in the old days they just used magazines and newsletters (and blogs!) rather than Facebook, Instagram, Twitter, and Youtube. As noted by David Shaw way back in 1987 (Wine writers: squeezing the grape for news):


A wine writer is a physician or a lawyer with a bottle of wine and a typewriter, looking to see his or her name in print, looking for an invitation to a free lunch, and a way to write off the wine cellar.

The most famous and influential of these has been Robert M. Parker Jr, who was a corporate lawyer before he became a Wine Influencer. In another 1987 article, Shaw noted (Wine critics: influence of writers can be heady):


Parker is the most influential wine writer on any publication, by such a wide margin that there really isn’t anyone in second place ... Parker’s visibility and impact have been magnified far beyond that of his newsletter readership [The Wine Advocate]. Several other wine newsletters and newspaper and magazine wine writers also trigger consumer demand when they write favorable reviews, but none approaches Parker’s extraordinary influence.

Parker, himself, seems to have always downplayed his own role, at least in public, referring instead to his “alleged power”. He set out to be a consumer advocate (hence the name of his newsletter), but instead he became principally a marketing tool. I would find this annoying, if it had happened to me.

Anyway, there is nothing new under the sun, just new ways to do the same old things. There are a number of online lists to tell us who are the current wine Micro-influencers (eg. Here are some of the top wine influencers that you need to check out in 2019 ; Top ten influential wine experts in the beverage industry).

The consequences of influence

There have been recent media comments about the potential downsides of the use of social media for influence. Is this a new phenomenon?

There have always been questions about potential conflicts of interest in the wine media. Indeed, David Shaw’s articles quoted above were intended to reveal what was then presumably unknown to much of the reading public — many, if not most, newspaper and magazine wine writers were paid very little money, and relied on wine producers and marketers in a way that could easily be seen as a conflict of interest.

Shaw seemed to take it a bit too far, mind you, because he tried to apply what he calls “ethical standards” for journalists to a bunch of amateurs who were (and are) emphatically and self-admittedly not professional journalists. However, the debate continues (see Is “pay to play” wrecking wine criticism?); and wine commentators continue to be questioned about their real motives for writing about wine (and in the past people such as Nathan Chroman and Jay Miller have left their publishers, under a cloud).

To what extent, then, are potential conflicts of interest relevant in the modern social media?

I noted above that Pay to Play is an established part of Influencer Marketing. Indeed, a simple web search will lead you to several sites that list Influencers who are available for a fee. At least it is out in the open in this case.

Marketers come under the same scrutiny, of course. For example, some Australian wine companies have recently been accused of using social media influencers to promote their products without disclosing their sponsorship (Australian wine companies accused of influencing influencers). Clearly, transparency has always been the key when conflicts of interest are under the microscope. The attempts by the Australian wine industry to penetrate the Chinese wine market are well known, and this year they openly hosted a group of Chinese wine influencers in Australia (China’s wine imports continue to slide as Australia overtakes France).

There is also the matter of having too much influence. Quoting Shaw from 1987 again:


The major criticism of Parker is that he has become too influential, too powerful a force in the industry. Indeed, many wine makers worry that his influence is so pervasive and his preferences so clear — he generally seems to like big, robust wines more than lighter, more elegant wines — that he is influencing wine makers as well as wine buyers.

This level of influence has not yet happened in the modern social media. 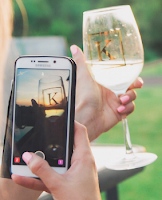 One of the more pointed comments comes from Outwines:


Unfortunately, wine seems to be one of a growing number of subjects that an individual can “influence” and have minimum actual knowledge about it. Snap a ton of pictures with wine bottles and smile, make sure to comment constantly and generically on others posts (something like “That looks like some good wine!” or “I’ll have to try that!”), join multiple pods, and boom – you’re on your way to being an influencer. For those in the wine industry, some of these influencer accounts can be exasperating since they tend to focus way more on engagement as opposed to actual wine education or experience. In order to be a true “wine influencer” – shouldn’t an individual ideally have some combination of all three?

Indeed, a couple of years ago Miquel Hudin discussed Why social media doesn’t sell wine, suggesting that places like Instagram aren't particularly well-suited to communicating about wine education or experience.

More recently, Miquel also discussed the potential for fraudulent use of social media (How that “wine influencer” might very well be a fraud). That blog post engendered a range of quite strong comments.

Finally, there are extreme examples of what happens in the world of Influencers. For example, recently an Instagram “star” posted a suicide note online, which has lead to Denmark planning government regulation of Influencers. Sadly, the note apparently got 30,000 likes before it was taken down.

Perhaps this is all a storm in a teacup. A recent report notes: Sponsored posts from Instagram influencers are driving less engagement (engagement is measured by comparing the average number of likes on each Instagram post to the number of followers of the account). Maybe it will all simply go away again, like a fad. After all, there are other members of The real influencers of the wine world.
Posted by David Morrison at 12:30:00 AM