Wine is sunlight held together by water

The title quotation is usually attributed to Galileo Galilei (along with a lot of other things). Whoever said it certainly had the grapevines' physiology right, although as far as the vines' environment is concerned it should mention both warmth and water.

When we are told about where grapevines will grow and produce nice wine, we are often shown a map something like this first one. This indicates that the world's wine-producing regions are generally between latitudes 30° and 50°, both north and south. 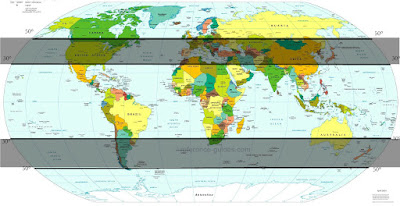 However, this view is rather simplistic, because grapevines don't really know or care about latitude, as such — they avoid the tropics (which is too warm and wet) and the poles (too cold). Besides, the vineyards of places like Sweden are further north than 50°, because it is warm enough for them to grow there.

So, a more refined map looks like this next one, which emphasizes temperature as a prime determinant of vineyard location — the world's wine-producing regions are generally in areas where the median temperature is between 10 °C and 20 °C (or 50–68 °F). 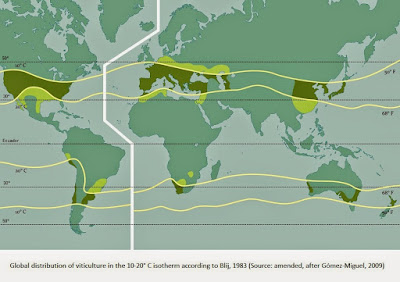 Clearly, this is not good enough, either. As shown in the map, there are plenty of grapevines outside this temperature range, including those of Sweden.

We could refine the temperature idea by focusing on the temperature solely during the growing season, as in this next map. This particular map is for the world as it was back in 1950 — by the turn of the century the temperature boundaries had detectably expanded north- and south-ward, as the world warms up. 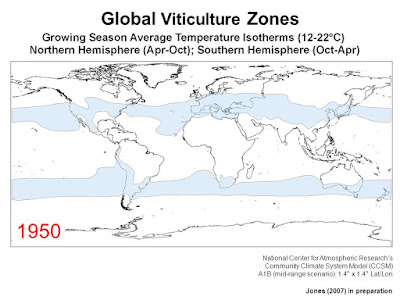 This idea was taken to its logical conclusion with the work of Maynard Amerine and Albert Winkler in the 1940s, who developed the idea of Growing Degree-Days — the sum of the daily temperatures above 10 °C (50 °F) during the grapes' growing season. This allows vineyard regions to be classified according to the Winkler Index, indicating which grape varieties are likely to do well: Region I (eg. Chardonnay, Pinot noir, Riesling, Sauvignon blanc), Region II (Cabernet sauvignon, Chardonnay, Merlot, Semillion, Syrah/Shiraz), Region III (Barbera, Grenache, Nebbiolo, Syrah/Shiraz, Tempranillo), Region IV (Carignan, Cinsault, Mourvèdre, Sangiovese, Tempranillo) and Region V (Fiano, Nero d'Avola, Palomino, Primitivo).

However, we still haven't taken water into account in this discussion. Indeed, geographers have long used the idea of combining temperature with water availability (particularly seasonality) to define geographical regions of the earth. Probably the best-known example of this is shown in the next map, where each color represents an area (zone) with a particular climate regime. Clearly, there is more to the location of these zones than simply latitude or temperature isotherms.

The person credited with initiating the drawing of this climate-classification map is Wladimir Köppen, a geographer who worked mostly in Austria and Germany between 1880 and 1940. The final version of his map was a joint work with the German climatologist Rudolf Geiger, and so the map is usually credited as the Köppen-Geiger Climate Classification. The current (updated) version of this map is available from the Climate Change & Infectious Diseases Department at the University of Veterinary Medicine, Vienna, with another version also available on Wikipedia.

For our purposes, we are interested in the following climate zones:

Indeed, almost all of the world's vineyards are in zones Csa, Csb, Cfa or Cfb. The definitions of these zones are:
Csa — temperate, summer dry, hot summer
Csb — temperate, summer dry, warm summer
Cfa — temperate, fully humid, hot summer
Cfb — temperate, fully humid, warm summer
The "C" classification (named Temperate) refers to the mean temperature of the coldest month being > -3 °C. The "f" and "s" classifications refer to whether there is enough rain throughout the year (f) or little to no rain during summer (s). The "a" and "b" classifications refer to areas with the warmest month ≥ 22 °C (a) or at least four months with ≥ 10 °C (b).

This classification works for our purpose here because of the climate requirements of viticulture:
mild winters with low freeze / frost risk;
stable, cloud-free conditions during bloom;
warm and dry summers;
dry maturation period with moderate to high daily temperature range. 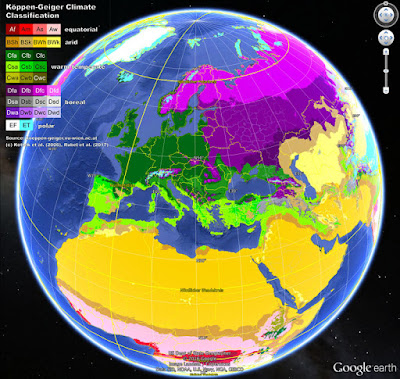 The validity of these classification zones can be seen in the above map of the area north and south of the Mediterranean. All of the current vineyard areas fit into zones Csa, Csb, Cfa or Cfb, including those of Sweden. The same is true, for example, of Australasia (South Australia: Csb; Western Australia: Csa, Csb; Victoria, Tasmania, New Zealand: Cfb; New South Wales: Cfa, Cfb), South America (Argentina: Cfa, Cfb; Chile: Csb, Cfb), and South Africa (Csa, Csb).

North America also fits into this scheme, with one group of intriguing exceptions. As shown in the final map, for the USA we have: California (Csa, Csb), Oregon and Washington (Csb, Cfb), and much the rest of USA (mostly Cfa, with bits of Cfb, such as the vineyards of New Mexico, the nation’s oldest wine-growing region). For Canada, the vineyards of British Columbia also fit into zones Csb and Cfb. 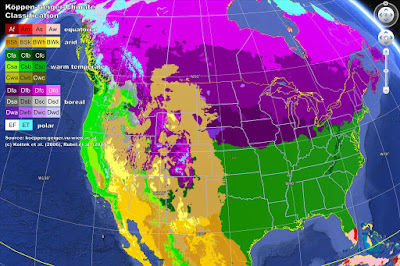 We would also conclude from this map that certain parts of North America are likely to be very poor for viticulture, including southern Florida (too warm and humid), and most of the Rocky Mountains (too dry at times when the vines need water). To be consistent, this conclusion should also apply to all of the north-central and north-eastern US states, plus all of central and eastern Canada — all of this area is in climate zone Dfb (in purple on the map).

The "D" classification refers to the mean temperature of the coldest month being < -3 °C. This is the so-called Snow climate zone rather the Temperate zone. This zone violates the viticulture requirement of mild winters with low freeze / frost risk.

And yet, there are vineyards throughout this Dfb zone, including the US states of Colorado, Minnesota, Wisconsin, Illinois, Michigan, New York, Vermont and Maine, plus the Canadian provinces of Nova Scotia, Ontario and Quebec. Mind you, none of these are extensive viticultural areas, although the wineries of the Finger Lakes, at least, are hardly unknown.

Grape-growing is not an easy proposition in zone Dfb, which is why few people try it. In the past, some people in these areas have chosen to use native vine species (including Vitis labrusca and Vitis riparia) instead of the Mediterranean one (Vitis vinifera), on the grounds that they will grow happily in their local environment; or people have produced hardy hybrids of these native species with V. vinifera. Nevertheless, most vignerons have persisted with the introduced vine species, and dealt with the climate zone as best they can. Perhaps one of the important climatic factors is the presence near many of the vineyards of large bodies of water: The Great Lakes — this will significantly moderate the effects of freezes and frosts.

Almost no-one else tries to grow wine grapes as a paying proposition in climate zones outside the C (Temperate) classification; at least, not without considerable help. For example, Australia's largest wine-producing area is largely in a BSk zone (B = arid, S = steppe, k = cold arid). This area is capable of Western-style agriculture only because it has a massive flood-irrigation scheme (called the Riverina) — the area is otherwise semi-arid (see the photo). When you see a bottle of wine that says it comes from "South-eastern Australia", rather than from a named viticultural region, this is where it originates (eg. Yellow Tail).

Finally, Guido Grimm has recently pointed out to me the existence of a small amount of Tanzanian wine, which is produced in a BSh zone (h = hot arid) of Sub-Saharan Africa.


This post was inspired by a post on the blog of my friend and colleague Guido Grimm (Wladimir Köppen — a climate-vegetation genius, and what this has to do with wine), to whom all credit is due.
Posted by David Morrison at 12:30:00 AM