Jason Wilson recently suggested that Wine media is broken, because of kickbacks associated with wine reviews. His contention is that the monetization of published wine reviews is not always transparent to the end-user. As an example, he notes:

The president of a major public relations agency, one with a client list that includes wine regions, big brands, and importers, told me that his firm pays “about $25,000 a year” to a certain influential wine publication. This was not for advertising purposes, he said. Instead, this fee was “to ensure that our clients’ wines are reviewed” and to make sure “poorly reviewed wines aren’t listed” in critics’ tasting reports. That’s what he alleged. This “about $25,000” fee also allows the agency and its client to see reviews two days in advance of publication date, he said. He insisted that his firm is not the only one who pays this kind of fee to this publication. 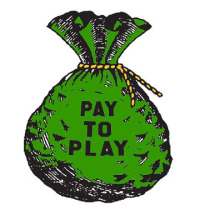 Unfortunately, the general idea of making special payments in return for a favorable wine-review environment in a particular publication has long been reported. Indeed, it has been reported repeatedly by commentators for a couple of decades, now. There is, indeed, nothing new under the sun.

For example, back in July and September 2006, William R. Tisherman (under the pen name W.R. Tish) wrote two columns (Off the Vine) for Wines & Vines magazine: Glossy buying guides: Getting past the smoke & mirrors, and Dare we critique the critics? Why not? (Thanks to Bob Henry for providing me with copies of the original publications.) Tisherman notes that the tasting of wines for glossy magazines is only one facet of the wine-rating process, quite separate from the way that the results are presented in the magazine — and this distinction changes everything.

He looked at Wine Spectator, Wine Enthusiast, and Wine & Spirits, and was very critical about their lack of transparency, in terms of what was reviewed, and how. He was also very clear about the fact that Wine Enthusiast and Wine & Spirits used label reproductions to generate revenue — that is, the wine supplier paid to have the label displayed next to their reviewed wine. This effectively became a (relatively cheap) means of advertising for the wine suppliers; but this fact was not disclosed to the magazines’ readers. His bottom line, was that: "there is more to wine magazines than what's on the page."

As a different type of example, in December 2012, Gary Thomas (Wine review editor for Palate Press) and David Honig (Palate Press’ publisher) produced an article in Palate Press (Well known writer has “pay-for-play” wine review scheme), accusing Natalie MacLean of republishing other professional writers’ reviews without prior authorization (i.e. intellectual property theft), and requiring wineries to purchase a subscription to her online wine review pages before she would review the wines (ie. a “pay-for-play” policy).

Jamie Goode responded to this 2012 article on his own blog, The Wine Anorak (Pay-to-play and wine writer ethics). He put his finger on the actual problem, in practice:

In the case of my blog, if I operated a similar policy, the net effect would be that you’d be exposed to less interesting wines. Most of the world’s interesting wines are made by smaller producers who, in many cases, couldn’t afford to, or wouldn’t be interested in paying to have their wines reviewed. My content would become dull, and I’d lose the trust and enthusiasm of my readers. I might make some money in the short term, but in the long term I would suffer.

So, people who review wine cannot always speak their minds about those bottles that are less than stellar, or even are undrinkable. They must keep negative thoughts and comments out of their writing and away from the public, because to do otherwise means that their sources of free wine will dry up. I suspect that very few professionals, or others who review wine, are not subject to this self-censorship. (The few who refuse to be censored are often very vocal about their own moral attitude.) This is, of course, not helpful to the wine-drinking public. Reviews (and ratings) are thereby not among the most reliable for selecting bottles of wine. 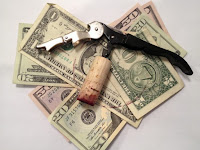 It has been pointed out to me privately that:

The baked-in favoritism (if not corruption) * all began when magazines started selling label reproductions [adjacent to “Buyer’s Guide” section reviews] and not defining/marking them as ads. In the early years, such labels helped wines stand out. This was expected to be financed by the wine producer; and refusal to pay meant that the review ran (unadorned by a label reproduction) in the magazine’s back pages of the “Buyer's Guide”. Over the years, it became easy, and lucrative, for magazines not only to pre-release their “high ratings” to potential clients, but also to actually not publish ratings in some cases.

In such manner could the wine-industry review scheme become what looks like a racket. The reviewers are damned if they do and damned if they don't — pay-for-play can exist, but not everyone can use it.

Finally, this pay-for-play phenomenon is not restricted to wine reviews, of course. For example, the LA Times has recently pointed out: How food influencers can make or break restaurants. Their quoted US$10,000 is an awful lot to pay a single individual for a favorable Instagram post!


* The AAWE Facebook page recently noted that there has been only one officially recorded incidence that might be considered to be bribery, this century (There are a few large offenders in the U.S. wine industry that have been fined millions of dollars for various violations). I will look at this topic next week.