It’s time to pay attention to the wines from Georgia, wine’s birthplace

According to current history, the first evidence of wine-making consists of jars dug up in Georgia, in very far eastern Europe — the jars are about 8,000 years old. The next bit of evidence consists of jars from present-day Iran (7,000 years old). After that, the first evidence of large-scale production is a winery ruin in Armenia, right next to Georgia — this is dated to 6,000 years ago. All of this pre-dates things like writing, for example, and so wine-making is one of the earliest civilized activities. (Note: the existence of wine alone does not imply active wine-making, since fermentation of grape juice occurs naturally.)

The 14th Annual Conference of the American Association of Wine Economists (AAWE) has been held in Tbilisi, the capital of Georgia, from August 24–28, 2022. To this end, the AAWE Facebook page has had a series of posts on the current wine-making situation in Georgia; and I thought that I might compile them here, for reference.

As a starter, though, the AAWE also provides links to show that Georgians have a sense of humour when advertising their wines:

It has been noted (The birthplace of wine) that:

Wine isn’t just a small part of the history of Georgia and the Caucasus Region — it is woven into Georgian and Armenian culture everywhere you look. In fact, upon landing in Tbilisi, one of the first things you’ll see is the Mother of Georgia statue standing tall above the city on a hill, with a sword for her enemies in one hand and a bowl of wine for guests in the other.

There has, of course, been a lot of wine history between the beginning and now. Most recently, of course, was the situation as part of the U.S.S.R. (basically 1921–1991; aside: Joseph Stalin was actually an ethnic Georgian). The situation since then was recently summarized by Meininger’s Wine Business International (Georgia: Caucasus blues):
There is also, of course, the effect of the current situation in neighboring Ukraine (The Bay Area fell in love with this country's natural wines; then the war in Ukraine made them scarce):

Bottles from the Republic of Georgia have been dramatically scarce in recent months, wine buyers report. These wines are a darling of the local wine scene, embraced particularly by natural wine fans, who appreciate the ancient, pre-industrial techniques that many of the country’s smaller wineries employ ... Skin-contact white wine, also known as orange, macerated or amber wine — which has been the Georgian specialty for thousands of years — is by far the most popular type of wine ... 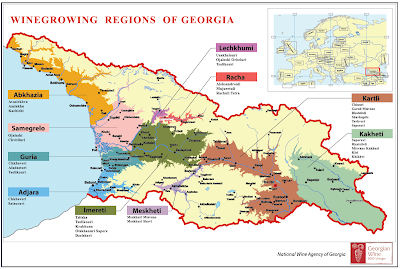 Map of the viticultural regions in Georgia

The country of Georgia is the birthplace of winemaking and home to 500+ indigenous wine grape varieties. However, most are not used commercially. In 2016, 87% of Georgia’s vineyard area was planted with white varieties. 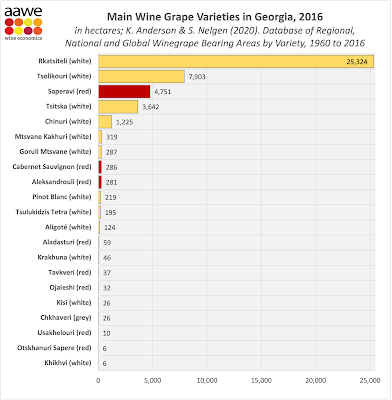 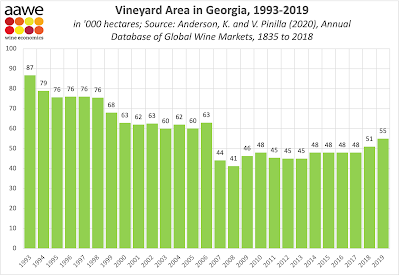 Overall, grape prices in Georgia are very low (about US$410 per ton). In Kakheti (75% of Georgia's wine production) grapes cost just US$385 per ton. In contrast, grape prices in the mountainous Racha-Lechkhumi & Kvemo Svaneti regions are above US2,000 and rising. 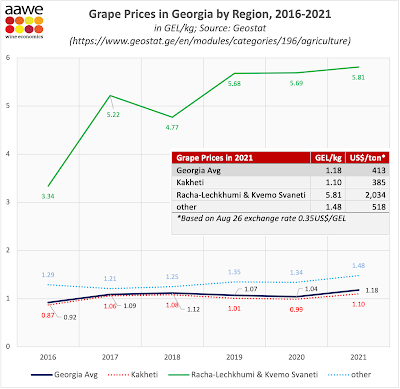 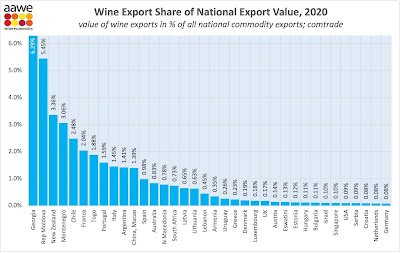 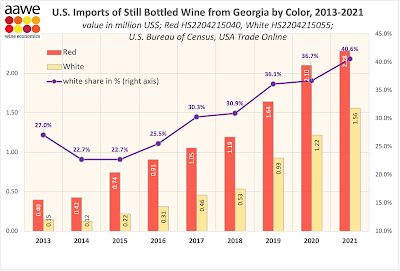 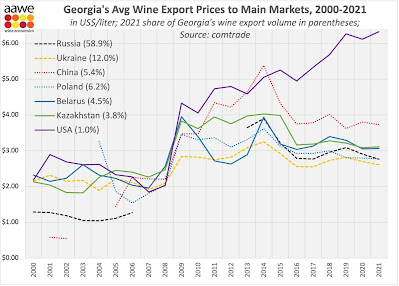 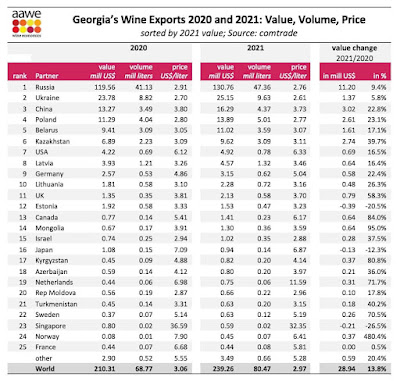 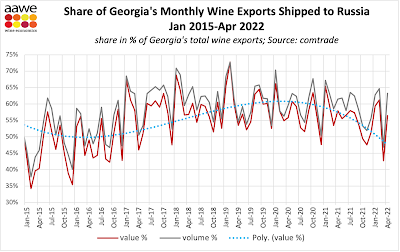 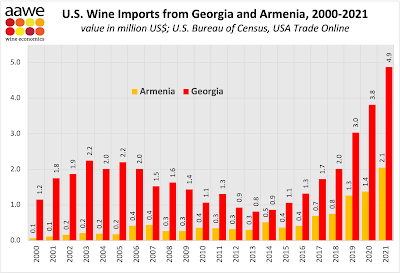 U.S. imports of wine from Georgia, 2021. The organic share of reds is much higher than of whites. Also, an 18% organic share for reds is second to none. Note, in order to be called “organic” in the U.S., a wine must not contain any added sulfites! 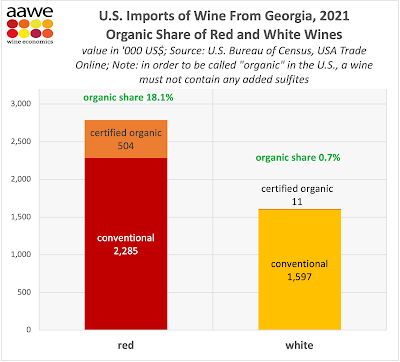 Little known — 11.3% of U.S. bottled still wine imports from Georgia are certified organic (by value). That makes Georgia a distant #1 among U.S.’s main import sources. #2 is Austria with a share of 7.4%, followed by Canada with 7.1%. 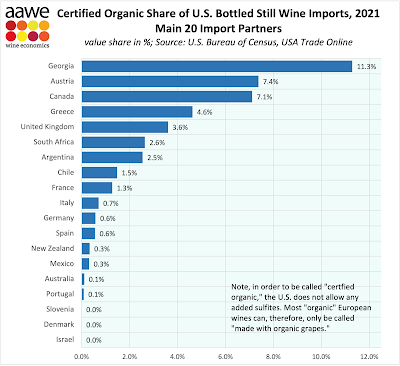