Climate change and the most northerly vineyards in Europe

As I sit here in my workroom writing this, it would normally be the depths of winter outside; instead, the hazel is now flowering.

SMHI, the Swedish weather bureau, officially defines the start of spring as seven consecutive days with an average temperature > 0°C. This normally occurs here during the last third of March; this year it occurred back in January. Indeed, SMHI has just announced that much of southern Sweden did not actually have winter (based on their official definition), but was recorded as going straight from autumn to spring. Also, new Swedish records have been set for the highest daily average temperature in January, with the towns of Oskarshamn and Gladhammar averaging 10.6 °C and 10.1 °C, respectively, across the month.

This example may be extreme, but it has become increasingly obvious to the wine industry that the world’s modern climate is not going to allow grape-growing to continue in its current form in its current locations. The climatic requirements of the common grape varieties no longer match where they have traditionally been grown. 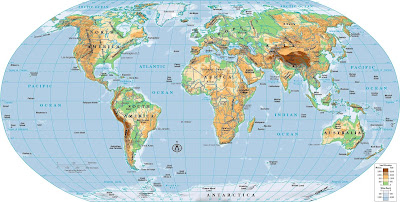 This means that we need to either: (i) change the varieties in the current regions, or (ii) move the regions further away from the equator or from sea level. A quick glance at a globe will show you that it is difficult to move the grape-growing regions of the southern hemisphere any further south. However, we could move the grape-growing regions of the northern hemisphere further north.

In the Americas, the current wine-growing regions of Canada are not actually any further north than the vineyards of Washington and Oregon in the USA. These are actually at the same latitude as northern France and the middle of Germany; so there is plenty of scope in Canada, as well as in Alaska.

In Europe itself, there are already plenty of vineyards in the Nordic countries (Denmark, Finland, Norway, Sweden), as I discussed in a previous blog post (Swedish wineries — who'd have thought it?). These are much further north than anywhere else on the planet; and there is also plenty of land even further north.

This leads obviously to the question: just how far north do the Nordic vineyards currently extend?

The answer is shown in the next map, where the pointers mark the northerly vineyards of Norway, Sweden and Finland (left to right). Note that these are at the latitude of the northern-most British islands (in Europe) and southern Alaska (in North America).

The leftmost vineyard shown in Norway was recently discussed in a range of wine media, because it harvested its first decent crop last year — see Keller’s most northerly Riesling project, and Norway’s first riesling (the latter has a video of the harvest).

The Riesling vines were planted in 2008, in a former potato field overlooking the sea, so there has been no hurry to get any grapes. The fact that the vines are Riesling is notable, because in the north most vines are hardy varieties, like Solaris (white) and Rondo (red), rather than the classic European varieties. Apparently, a protective wall was built to help matters, along with the collaborative expertise of grape-growers from Alsace. 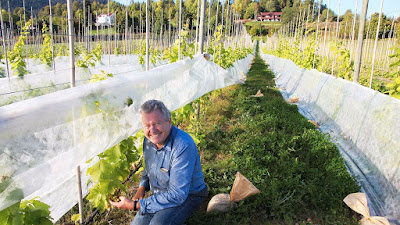 The more northerly Norwegian vineyard (west of Oslo) is far more typical of the Nordic situation. It is part of a farm, Egge Gård, that grows other fruits (eg. apples and strawberries), and mainly makes fruit-juice, ciders, spirits, etc. The first media report of note about the grapes is Norway’s first sparkling wine, from 2015, which seems to have been otherwise ignored.

Only one wine is mentioned in the report, a champagne-method sparkler made from Solaris grapes (in the report there is a video of the farm and wine-making). The vine-stocks (1,000) were planted in 2010, and the first harvest was in 2014. The grapes were pressed in the farm’s apple press. This produced 500 bottles of wine, called ONE, with 350 of them going to Poland! The vines were planted on the warmest part of the farm, on the south-facing slope of an old moraine ridge, where there is sun all day.

There are plans to expand the vineyard with 10,000 more plants, intended to produce 20 tonnes of fruit and 12,000 bottles of wine; see Ready for vintage in Norway’s Tuscany. 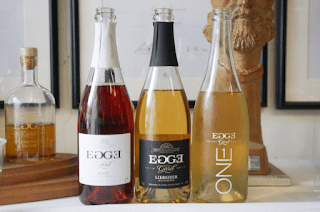 The above mention of day-length is currently the crucial thing about Nordic vineyards. There are longer days than most European countries, with up to 25% more hours of daily sunlight during the summer compared to, say, France. Day-length makes up for warmth.

Since it extends further south, there are currently many more vineyards in southern Sweden than in Norway, as discussed in my post Swedish wineries — who'd have thought it? Also, the vineyards are mostly around the coast, making them considerably warmer than the inland areas of Europe (and North America). You can see a current location map by visiting Föreningen Svenskt Vin.

The most northerly of the commercial Swedish vineyards is actually inland, at Blaxsta Gård, as shown on the map above. In the following satellite photo, the property is the farm irregularly outlined at the bottom-left, with the vine rows clearly visible.

There are c. 3.5 hectares of vines, with 5,500 vine-stocks, the first being planted in 2000. The vines are planted along a south-facings slope near a lake, which helps moderate the climate. The varieties include Merlot, Chardonnay, Cabernet Franc, and Vidal Blanc, with the latter taking up 90% of the area.

These vines produce 7,500 liters of wine, all of which is commercially available. The most famous (and expensive) wine is the Vidal Ice Wine — it retails for $US70 for a one-third bottle. The Merlot and Chardonnay make table wine, while the Cabernet Franc also makes Ice Wine, as also do apples and strawberries (does this sound familiar?). 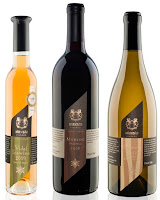 Finally, this brings us to Finland, whose fruit-based products almost all come from the Åland islands, in the Baltic Sea. There are, as you might expect by now, farms making alcohol products from apples and other fruits. The largest appears to be Tjudö Vingård, which specializes in apples (10,000 trees) and cherries (2,500 trees).

However, of interest to us here is Mattas Vingård, which is shown on the map above. This farm has Solaris and Rondo grape-vines, and appears to be the only one to have grapes. The 600 vine-stocks were planted in 2009, with Pinot Noir also being (unsuccessfully) tried.

Sadly, the grapes are mostly used to make jelly, which is the farm’s advertised specialty (they recommend it with cheese). However, starting in 2014 they also tried making a sparkling wine, Trädgårdslindan Rosé Brut. In 2015 and 2017 it won medals at the Indy International Wine Competition, in the USA. Only 150-200 bottles get made, which are not commercially available. You can read about the vineyard at Slotte odlar prisbelönt vin på Åland, if you happen to read Swedish. 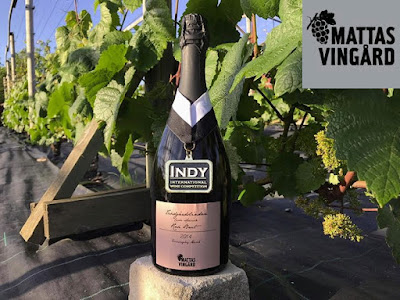 So, it seems to me that Norway currently has Europe’s most northerly commercial vineyard, with Sweden and Finland not far behind. This can be expected to change in the not-too-distant future, unless we can reverse climate change.

As pointed out in the Comments below, there are now vineyards along the Sognefjord, which is even further north-west in Norway.

The one that seems to have garnered media attention (eg. New York Times and Wall Street Journal) is Slinde vingård, established in 2014 by Bjørn Bergum and Halldis Nedrebø. The vines are at the top of a steep south-facing slope above the fjord, along with the usual Nordic fruit trees (visible at the upper-right of the photo below). Wine has been made since 2018, from Solaris (white) and Léon Milot (red), as well as some Pinot noir. Apparently, Lydia (Solaris) has already one a medal. The first commercial wines are expected this year; and vineyard tours are already available. 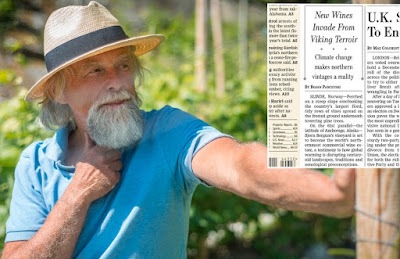