The rise, rise, fall and rise of Australian wine

Global Wine Markets, 1860 to 2016: a Statistical Compendium (by Kym Anderson, Signe Nelgen and Vicente Pinilla. 2017. University of Adelaide Press) lists a number of countries that are net exporters of wine, in the sense that wine production per capita exceeds wine consumption per capita, including (in decreasing order) Spain, Chile, Italy, New Zealand and Australia.

Technically, the story of Australian wine starts on January 1st 1901, which is the Australian equivalent of July 4 1776 for Americans (except that the British decided to avoid having the Australians shooting at them, to make them go away). Until that time, it was Empire wine, not Australian wine.

Nevertheless, there was a pre-history for Australian wine. For example, Kim Brebach has noted:


Australian wine had a heyday in the latter part of the 19th century, when the Gold Rush brought all kinds of adventurers to the country. Boat people, migrants, refugees. They came from the old world and the new (America). They were seekers of fortune, followed by entertainers, suppliers of mining needs, cooks and market gardeners.

The depression of the nineties saw a return to a simpler life for most Australians, where survival was the order of the day and food and wine took a back seat. Little changed through the first decade of the new millennium, and the second, which saw the Great War, as they called it. By the end of the third decade, things began to look up, but then the sky fell in on the stock market, the Great Depression followed, and yet another Great War.

For the first half of the 20th century, winemakers survived by turning much of their fruit into Brandy, Sherry and Port ... Table wines were a rarity because drinking wine with food had become a vague memory from a bygone era to which most people had lost the link ... Of course there were people who drank table wine during the war years and the depression — doctors, lawyers, academics and other professionals — but their number was small.

So, for our purposes, the real story of Australian wine actually starts mid-century, with what has been called the post-war Baby Boomer generation. This, incidentally, is my generation.

The first thing to get clear is that there is actually no such thing as "Australian wine". Australia is a continent, the size of the continental USA and larger than continental western+central Europe, as shown in the above figure. So, there are as many radically different wine-growing regions within Australia as there are anywhere else on this planet; and the diversity of wines and styles reflects this. Don't let the fact that it is a single country fool you into thinking that there is a single wine style.

Nevertheless, Wine Australia, the nationally funded statutory service body for the Australian grape and wine community, likes to talk about "Brand Australia", and who am I to argue? So, I will look solely at the national level in this blog post. Most of the data for the following graphs come from the book by Kym Anderson (with the assistance of Nanda R. Aryal) Growth and Cycles in Australia’s Wine Industry: a Statistical Compendium, 1843 to 2013 (University of Adelaide Press, 2015) .

Let's start by looking at the graph that inspired the title of this blog post. Each point represents one year, from 1901 to 2017, showing the value of the wine exports in A$. Note that the value scale is logarithmic, so that a straight line on the graph represents exponential growth.

This is what economists like to see, but it is not really sustainable, because suitable land has a finite area, and so there is a limit to production.

Moving on, what happened after 1980? Why was there a sudden increase in exports? To look at this, we need to consider Australia's population size, and the behavior of the people. This next graph shows the population size through time. Note that the graph scale is not logarithmic.

The graph shows three distinct periods of different rates of population growth. Australia's population growth is, and has been since 1788, dominated by migration — currently, more than 50% of the populace are either first or second generation migrants. (There is no other country on the planet that is like that.) So, what the graph shows is three periods of migration rate, with a dramatic increase in migration immediately after World War II, and another increase at the turn of the current century.

This has been counter-acted to some extent by changes in consumption of wine, as shown in the next graph. Wine consumption (per adult, of course) rose dramatically during the 1960s, peaking during the 1980s. It was the recent Italian, Greek and other European migrants who re-introduced the locals to the delights of good food and wine after World War II. Like California at the same time, Australia was still producing bulk wines with faux-French names well into the 1960s; but this changed during the 1970s, to a celebration of Australian wine styles for their own sake.

The Australian wine industry started a concerted effort to attract the world's wine consumers to Australian wine; and it was at this stage that the world wine media first started paying serious attention to Australian wine. As an aside, the odd peak of exports in 2007 (as seen in the graph) was due to a dramatic decrease in wine production that year.

However, by 2010, exports had also reached a plateau, as a percentage of production. Indeed, by 2005 export volume had exceeded 50% of production, and this was actually the peak in the value of wine exports (as shown in the original first graph). It has remained at 50-60% since then, but the dollar value of exports has decreased.

It was at this stage that the Australian wine industry was losing its way. With the exception of the boom in Yellow Tail wines in the USA (see Yellow Tail and Casella Wines), the first 15 years of the new millennium were poor ones for Australian wine exports.

Basically, the exports focused on the cheap end of the wine market; and this is no way to make money. The Australian wine industry became known as a source of inexpensive wine, mostly exported in bulk. I have discussed this issue in previous posts (Global wine exports; United States wine imports and exports), noting that, for example, Australia has recently made less money per liter out of its wine exports to the USA than anyone else, in spite of being the second-largest supplier, as a result of the industry's approach to doing business that has confused volume for profitability.

Domestically, Australia has gone the same route as the United Kingdom, so that almost all wine is sold through the two biggest local supermarket chains. In the UK, the chains started buying cleanskin wines (usually from wine co-ops or factory-scale commercial wineries), and marketing them with own-brand labels — actually, they used to hire Australian winemakers to "clean them up" for the tastes of the UK market!

So, the Australian supermarkets currently own the retail (>70% market share), the distribution and the winemaking, as far as domestic consumption is concerned (see the list of wine brands at Who makes my wine?). Apart from the own-brand wines, the supermarket-owned liquor chains mostly favor the big wine companies (Treasury Wine Estates, Accolade, Pernod Ricard), which own about 70% of Australian wine production (their brands are also listed at Who makes my wine?). The other 30% of production is made by c. 2,500 small- to medium-size wineries. 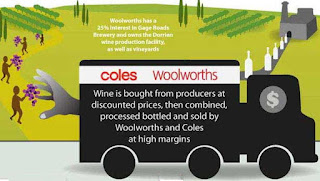 Australia has recently signed a number of free trade agreements, notably the Trans-Pacific Partnership (Australia plus: Brunei, Canada, Chile, Japan, Malaysia, Mexico, New Zealand, Peru, Singapore, Vietnam. The current US president withdrew his nation from their original intention to be part of this deal, which may disadvantage Australia, given the size of the US market; but on the other hand, he is also embroiled in a tariff dispute with China, which will probably benefit Australia. The expansion of free-trade agreements is notwithstanding the current problems between Canada and Australia.

So, the recent focus has been on China. The current free trade agreement between Australia and China took effect in December 2015. France is still the dominant wine seller to China, holding about 40% of the imported wine sales market. However, Australia has been in second place for a decade; and, while French sales growth has been steady, Australian exports have skyrocketed. China is now Australia's largest wine export destination (A$848m), with the USA now second (A$449m) and the UK falling to third (A$348m). Indeed, it has been reported that, due to a smaller 2018 harvest plus the growing Chinese market, demand is now outstripping supply for bulk exports of Australian red and white wines.

The recent focus has also been on premiumization. Treasury Wine Estates, in particular, have finally realized the dollar value of selling premium wines rather than getting involved in wine discounting — they are now selling less wine but doing so much more profitably (leading to a rapid rise in its share price). The key export brands are currently the premium brands: Penfolds and Wolf Blass. TWE's main focus is now firmly in China — it is not for nothing that the super-premium Penfolds G3 wine was launched at the exclusive Liang Yi Museum in Hong Kong, not in Australia.

The Australian wine industry at large is slowly learning this same lesson. For example, over the past decade, the value of Australia’s wine exports to China has expanded roughly twice as much as volume. China is the country where Australian exports have the highest average dollar per liter (AU$5.55), while the USA is only now seeing growth in Australian export wines that sell above $15 retail.

So, here is the first graph again, with a couple of lines added, showing that: (i) the initial rise in wine export value was simply a balance between population and wine consumption on the one hand and wine production on the other hand; (ii) the second rise in exports was a concerted effort to deal with saturation of the domestic wine market after 1980; (iii) the fall at the turn of the century was due to saturation of the export wine market and a focus on unremunerative bulk exports; and (iv) the final rise is due to a recent focus on premium exports, particularly to China.

I have been asked about the affect of inflation on the dollar value of the exports (Australian inflation has been an average of 4% annually since 1901). So, I have used the Inflation Calculator available from the Reserve Bank of Australia, to convert all of the export values into 2017-equivalent AUD. This is shown as the reddish line in this next graph, for comparison with the unadjusted data.

In September 2018, Kym Anderson published a more extensive coverage of the same topic (Australian wine industry competitiveness: why so slow to emerge? Australian Journal of Agricultural and Resource Economics 62:507-526).
Posted by David Morrison at 12:30:00 AM