Putting the wine industry in its place!

People in the wine industry naturally see wine as an important beverage. At the same time, we should all remember where wine sits, in the big scheme of things. I say this as a wine drinker — I prefer wine to beer, and both of them to spirits; I don't generally drink tea or coffee; and sugary carbonated drinks do me no good at all. None of this stops me, however, from seeing the data for what they are.

The graph below lists the top 14 beverages globally, in terms of volume consumed during 2016 (taken from Euromonitor International). As you can see, wine comes 9th, way behind beer and a little bit ahead of spirits. Should we be happy that wine is in the top 10, or sad that it is 9th out of 14?

That tea is number 1, ahead of bottled water, might surprise you; but it has long been known to be The world’s top drink. The list of the top countries by overall tea-consuming volume is pretty much what you would expect (Ranked: top 15 tea-drinking countries), with the two biggest countries on Earth out in front (China and India), but Russia is right behind, and then Pakistan. The latter is actually the world’s biggest tea importer, and that has become problematic recently (Pakistanis told to drink less tea as nation grapples with economic crisis).

However, the situation changes pretty dramatically when looking at tea consumption per person (List of countries by tea consumption per capita), with Turkey and Ireland out in front, and Russia relegated to 5th place, China to 20th and India to 28th. Even Australia and Germany drink more tea per person than do China or India! Indian tea-growing is, of course, also having trouble with climate change, just like everyone else (Why climate change is bad news for India tea producers).

Moving on, the fact that wine is also behind other non-alcoholic beverages such as coffee and fruit juices is also not much of a surprise. This is in spite of the fact that coffee is the most labor-intensive beverage to produce, and coffee plants are among the thirstiest (These California farmers want you to think about coffee the way you do wine).

That wine should be behind beer is no surprise, either, as it has long been behind in most parts of the world. Beer is usually treated as a lower alcohol beverage, which can thus be drunk on any occasion. However, we should remember that beer making and drinking can be just as esoteric as for wines (Why modern brewers are embracing centuries-old technology). 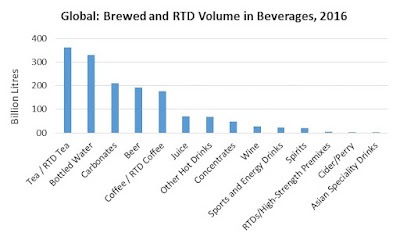 The position of wine relative to other drinks is not expected to improve in the near future, either. It has been endlessly reported (e.g. the State of the Wine Industry Report 2022) that younger generations, particularly Millennials (now aged 25–40), who are currently setting the tends for the alcohol industries, are far less interested in wine than were older generations (such as Baby Boomers like myself). Wine has therefore been losing significant share among these younger drinkers to other choices, including spirits, seltzers, and RTDs. Indeed, as drinking habits adjusted during the current Covid-19 pandemic, RTDs have apparently been the stand-out category for at-home consumption (Soft drink giants cosy up to spirits brands as canned cocktails soar).

Even worse, abstainers have apparently increased in number during the pandemic, along with a reduction in the general frequency of wine drinking (Survey further confirms market fight). Indeed, it has also been noted that beer drinkers prefer spirits (not wine) as their alternative drink, and that spirits drinkers prefer beer (not wine) as their alternative drink (A silver lining beneath wine’s dark cloud). Even more depressing: Alcohol-free wine presents challenges in filtration and quality assurance, so that this will not be a simple way forward for the wine industry.

On the other hand, we are also told that Americans are drinking less but better. That is, Millennials, in particular, tend to purchase more premium products than did their predecessors, but less often (Global alcoholic drinks value growth significantly outpaces volume growth). They are also reported to be amongst the highest spenders on wine in markets such as Australia, Sweden, the USA, and the UK. So, all is not lost (see my post: The wine industry is asking the wrong question).

Anyway, the wine industry is the XS size compared to the XXL of most other beverage categories; so that being in the wine industry currently requires a lot of optimism. One has to be in it because one likes it, not because the public see wine as a highly valued beverage. As the economist John Maynard Keynes once put it (The General Theory of Employment, Interest, and Money):

If human nature felt no temptation to take a chance, no satisfaction (profit apart) in constructing a factory, a railway, a mine or a farm, there might not be much investment merely as a result of cold calculation.


* I have been reading the book Angel Customers and Demon Customers, which starts with the basic (unquestioned) assumption that the principal objective of any company is to raise it's stock price for it's shareholders, rather than do anything productive (due, I guess, to Milton Friedman). The authors arrive at the conclusion that the way to do this is to be customer—centered, which means that they arrive at a good conclusion but in completely the wrong way. Similarly, there are literally hundreds of Youtube videos telling poker players "what they are doing wrong" by not making money when they play, which misses the point that the players are there to have fun, first, not make a profit. They can't all make a profit, now can they, since all they are doing is taking money from each other.